Football is a high-contact sport, but it isn’t the only one that can be dangerous for kids’ brains. | Photo courtesy of Herbert D. Banks Jr., Wikimedia Commons

Editor’s Note: This article is from our Science for Kids series, aimed at children in grades 4-8.

Do you play football, baseball or basketball? How about cheerleading? Swimming? Hockey? Do you love to have a snowball fight with your friends?

All of those things are great, and getting outside to play is very important. But being safe while you do it is important, too.

Just like you can get bumps and bruises on your body from playing too hard, you can bruise your brain, too, from hitting your head. Research on those brain injuries, known as concussions, has grown tremendously in the past few years.

Research from the University of Vermont shows concussions early in life can affect your brain years down the line. The study found a connection between participation in a full-contact sport that involves frequent blows to the head – in this case, hockey – and the thinning of the cerebral cortex, the part of the brain that helps people solve problems and remember things. In this study, 29 hockey players from 14 to 23 had scans done on their brains and were asked about how many concussions they’d had in the past. These players, just a few years older than you, showed trends that might mean poor mental health in the future.

Hockey isn’t the only sport that could result in concussions. Just heading a soccer ball the wrong way, for example, could bang up your brain. The only way to treat a concussion is with appropriate rest and testing to make sure you’re ready to play again when you get back in the game.

“Kid’s brains are developing, so a concussion in a developing brain usually affects it a lot more than in an adult,” said Dr. Aaron Gray, a physician who works with players for Missouri’s athletics programs. “If a kid suffers multiple concussions when they’re young … it definitely makes it more dangerous for them to play contact sports in the future.”

That sounds scary, but it’s actually a good thing to know. These studies help show us what we need to look out for when we play sports, and they help us understand what can go wrong if we aren’t playing it safe.

Your favorite players in college and pro sports get all kinds of treatment and attention to make sure they aren’t playing with bad injuries, so you should too, right? Right. So, here are some tips about concussions to keep in mind, both for yourself and your friends. Be sure to tell your parents what you learned, too! They’ll definitely be impressed and grateful that you’re watching out for your own safety, and even if it doesn’t seem all that cool, it’s super important. 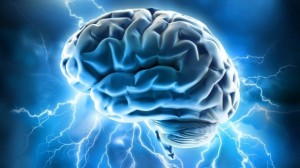 Your brain is a powerful tool. Be careful with it! | Image courtesy of aboutmodafinil.com, Wikimedia Commons

Be safe, but have fun. One of the doctors in the Vermont study, James Hudziak, has two kids who play ice hockey. That’s what got him interested in this study in the first place! But he isn’t telling his son and daughter to stop playing. He sees sports as a way to stay healthy and happy. What he wants is to keep the risks low, which is probably what you want, too.

“My goal is not to rid the world of these sports,” Hudziak told the University of Vermont’s news group. “My goal is to make these sports safer, so that more people can play them.”

Concussions don’t happen only when you’re hit in the head. Most of them do, but it doesn’t always happen that way, according to the Centers for Disease Control, which came up with concussion fact sheets for coaches and players. Concussions are actually caused by sudden and sharp movement of the head, so even if your head isn’t hit during a fall or a tackle, take a second to make sure you’re OK. “You want to make sure that you have the proper equipment,” no matter what sport you’re playing, Gray said. “You want to make sure your equipment fits well and that it’s up to the current standards.”

You don’t always notice concussions right away. Kids often feel the effects of concussions for longer periods of time, and things such as headaches come on stronger, Gray said. Sometimes, however, symptoms can take a bit to begin. If you’re feeling woozy after playing or have a headache, make sure you tell someone. If sounds or lights are bothering you, that’s another sign you might have a concussion. Concussions can be mild, severe or somewhere in between, and each type has different symptoms. Remember, it’s better to be safe than sorry.

Don’t try to rush your recovery. It’s hard to sit out and watch your teammates playing without you, but it’s important not to rush back into the game after a concussion. Remember, this is your brain! Just like with any other injury, if you are not fully recovered, it’s more likely that you’ll get hurt again. “If an athlete has a concussion, his or her brain needs time to heal,” according to the CDC. “A repeat concussion that occurs before the brain recovers from the first—usually within a short time period (hours, days, weeks)—can slow recovery or increase the chances for long-term problems.”

If you want more information, check out STOP Sports Injuries, an organization that provides helpful tips for safe play of almost every sport. And remember this last word from Gray: “Your head is the most important body part.”